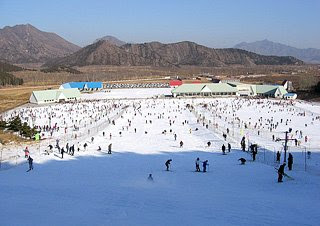 Where better to start than with an image of one of Beijing's artificial ski slopes. An image of one of Beijing's 67 golf courses would have been equally pertinent for a city some 40 kms from the surrounding desert, which is approaching at a fair clip. Having drained its own aquifers, this is also a uber-power metropolis which draws it water supplies from 100plus kms away, at the expense of rural farmers who now barely subsist on husks and stalks.

Time to put it all together, rather than value adding to Sites I Enjoy.
In 1927 Karl Wittfogel published Oriental Despotism: A comparative Study of Total Power.

"This book examines the origins of complex societies and states. Historical in nature, the book identifies the management of water as a method used by Chinese emperors to gain power over their people. The emporers developed "hydraulic societies" which were dependent on complex irrigation systems. Wittfogel felt that the cost of hydraulic construction and its subsequent maintenance required a political and social structure capable of forceful extraction of labor. This led to despotism. "Those who control the (hydraulic) network are uniquely prepared to wield supreme power.(1)"

Wittfogel focusses our attention on socio-political power monopolies and water control, water being the most fundamental of natures resources, and mega wealth the key to its access and fuck the welfare of the peons.

In his view, many societies, mainly in Asia, relied heavily on the building of large-scale irrigation works. To do this, the state had to organize forced labor from the population at large. This required a large and complex bureaucracy staffed by competent and literate officials. This structure was uniquely placed to also crush civil society and any other force capable of mobilizing against the state. Such a state would inevitably be despotic, powerful, stable and wealthy(2).

Again, I refer you to Isabel Hilton and a final quote:

Well, the way China’s approached water management – again, over centuries – is that they’ve always tried to engineer their way out of a problem. There are two approaches: one is conservation and the other is engineering, and the Chinese have always favoured engineering from the Grand Canal onwards.

They still do favour engineering: mega-projects like the Three Gorges Dam, or the big one now, which is the South-North Water Transfer. South China and West China for now have water and they propose this massive bit of engineering which will divert water from the south to the north.(3) 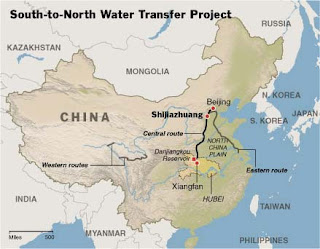 “Water in the south is abundant, water in the north scarce. If possible, it would be fine to borrow a little.” The meglomaniac hand of the Great Helmsman coyly reaching out and inspiring the present leadership in Beijing into another enviromental folly, which you can read about in excruciating detail here.


So lets examine the report card on Folly # 1 The Three Gorges Project costing $US 23 billion plus to build a 2,500ft obstruction using approx 16 billion tons of concrete. Last October it reached optimal hydro capacity at 574 feet, but today's water levels has dropped to 150 ft and is going south as a consequence of climate-change induced drought. "The government says that the least rainfall in at least 50 years has affected some 3.2 million-plus acres of farmland in seven provinces. In five provinces, 4.2 million people are having trouble finding drinking water. In one province, Hunan, which borders Hubei, rain hasn't been so scarce since 1910, a provincial official told the state Xinhua newswire".(4)

If you hit Xinhua news reports you can pick up all manner of piecemeal statistics, but here are some salient points. Hundreds of dams and resevoirs are drying up, incl Lake Dongting the second largest in the country. Fish farms are finito in key wetlands. Shanghai's water supply is under threat. Shipping in the middle and lower reaches of the Yangtse is grinding to a halt and provincial power grids are going into serious outages.

Net result. Hiking food prices, social dislocation in affected areas and further loss of valuable farm land. And an impending rat plague I kid you not, and not forgetting a connection to the Wenchuan earthquake here.

Now to connect all the dots which describes this Oriental Despotism.

Like the rest of the world, China is experiencing dramatic climate swings. Floods one month, droughts the next, and these extreme patterns will become more pronounced in time to come. Intensive agriculture and herding practices have been a characteristic of Chinese civilisation for centuries and large parts of north and east China have totally exhausted nature. (Google maps here.) Throw in Mao's misguided agricultural prescriptions, recent and totally unregulated use of fertilisers by farmers trying to squeeze out optimal market potential, and we have what I will term a malignant environmental despotism.

Then we have a politico-demographic despotism. Major population shifts from rural to urban areas and from the hinter-provinces to the seaboard mega cities. I include those politically planned demographic changes in Inner Mongolia, Xinjiang and Tibet. And Beijing has plans for even greater urbanisation of it rural masses in the near future. In short, population engineering on a grand scale, and I'm sure serious scholars can identify numerous historical precedents here. Hardwired mentalites a la Braudel.

Finally, a political elite-money despotism, consisting of extended networks of guanzi, corruption and profit which go into play everytime land is reclaimed for hydro and water diversion projects,urban redevelopment or whatever, enforced by an extensive and despotic machinery of PRCs police/internal security apparatus. Engineering wealth creation for a small minority.

And to wind up my dubious argument, let us look at a how wealth is spent by the well-connected beneficiaries of this engineering mentality. Well, we began with the artificial ski slopes in Beijing, but we could equally focus on the proliferation of golf courses (now euphemistically called nature reserves since their ban in 2004), or even yachts in Shanghai and Hainan island. With the exception of the latter, misdirected water priorities is the common demominator.

Dodgy beginnings I know, but a theoretical line of argument well worth refining, dear readers.


Fn. As there is no wisdom without a slog thru a scholarly article, try this:

Thanks to Granite Studio for the link clue.

UPDATE with thanks. THE CHINA BEAT HEREand an interview with environmental historian Kenneth Pomeranz who emphasises:

"...the link between water problems and rural/urban issues, the connections between water shortages and poor enforcement of environmental regulations, and the ways that both of these are related to tensions between different levels of government".

UP UPDATE. "In 2004, there were about 170 golf courses in China, and today there are nearly 600—despite the fact that development of new courses has been illegal since 2004". Stanley Lubman China Real Time Report.

AND ANOTHER: Jonathon Watts of The Guardian provides an excellent piece of Nothern China aquifer problems HERE.
Posted by KingTubby at 16:53