Since I have been bothering Adam's site as well as JRs and CMP (see See Sites I Enjoy) about Chongqing's supremo Bo Xilai, there comes a time when one needs to aggregate one's thoughts on this photogenic, chick magnet pol. Consequently, I went looking for a suitable photo of young Bo, when I came across this excellent entry on Chongqing/Bo Xilai by Joel Legendre-Koizumi.

Not only does Joel cover Bo's personal as well a Chongqing's history, which would have been my initial task, but his site is pure eye candy to behold, and I highly recommend it to my half dozen or so readers.

Bo has been getting a lot of media oxygen for his go-go pro-business stance, Red Texting and his faux retro Red Songs programs in both the media and the workplace, as well as his low-cost housing for the less-than-wealthy in his vertical city. Wont be providing links here. Hey, reading is not a passive activity as Roland Barthes et al pointed out in the '70s.

A couple of entres before the main course.

Since the rise and rise of Bo in Chongqing was based on his anti-mafia campaign, here is a must read by John Garnaut on business practices in this now squeakier-than-clean city here. It reads like a thriller and involves bribes by the suitcase load, kidnapping as standard business practice plus provided female companionship.

I should also note that I have already argued that Garnaut did not acquire this dirt firsthand, but throught his friendship with that windbag Yang Hengjun. Back scroll thru ChinaGeeks and China Media Project for my fevered speculations. (Both Garnaut and Yang live in Sydney.) Furthermore, the Bo clique excecised their cross-province influence and scared the living crap out of Yang when he was detained a few months ago in Guangzhou. Yang's attempt to engineer a bit of publicity prior to PM Gillards visit went horribly wrong - a bit like one of his thriller plotlines which went off the rails - and he was reduced to a scribbling idiot here and here after being invited to a very bitter tea party. These are the two key backscrolls noted above.

Now that ChiCom mouthpieces like China Daily etc are beginning to cast a critical eye on the mega-hydro disaster projects like The Three Gorges, it is nice to see that the Chonqqing governemt is able to swim against now-critical public opinion, and get its very own mega dam here

However, any modern Armani suited warlord is not satisfied until he has covered all bases, and Bo does it in spades with his new digital surveillance system here. 500,000 cameras with a centralised feed and costing $2.6 billion. London's Boris Johnson, another charismatic pol, must be green with envy.

Once again Bentham's panoptic principle goes digital and rather than be articulated within a single institutional building, be it a hospital, prison or a school, it can now cover the total public space of a city. Wikipaedia has a particularly good entry here.
As Foucault points out in Discipline and Punish, we are dealing with seriously disciplinary societies with their pervasive ambition to observe and normalise.

Individuals never know when they are being observed, so they adjust their behaviour
accordingly.

So you had better sing out The East is Red with enthusiasm, or else!!! 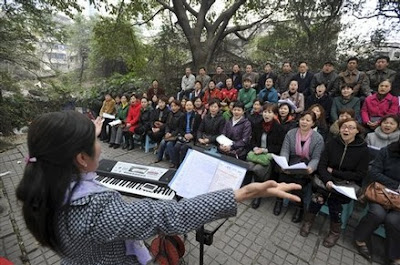 Addendum
And if you think our Princeling is impervious to mockery, you would be dead wrong and would be heading for some time in the Big House plus a few struggle sessions.

Crikey, I would be moving to Albania.
Posted by KingTubby at 18:34