KTs Military Affairs Desk: Why the Pacific will turn Red!!!

For the first time in ages, I turned on the TV and caught the ABCs (govt channel) 24 Hour (so-called) News Channel and their report on China's first aircraft carrier. It was a breathless segment on "China's worst kept secret" being refitted in Dalian Harbour and photographed thru a back window of a major supermarket (maybe Carrefour - correction Ikea superstore). Followed by LT Qi, who appeared to have a wonky lower jaw.

"All of the great nations in the world own aircraft carriers -- they are symbols of a great nation," Chen's assistant chief, Lt. Gen. Qi Jianguo, assistant chief of the general staff, told the Hong Kong Commercial Daily. But Jianguo also emphasized that after the carrier was deployed it would "definitely not sail to other countries' territorial waters."

And this segment finished with a flourish with some expert from Foreign Policy rabbiting on about China's blue water fleet ambitions plus her recent aircraft roll outs. The final rhetorical note: 2020 would be the year when China would be able to challenge the US and her allies in the Pacific Lake.

I was rivetted. Totally bloody terrified by these projections and I envisaged Australia's defence mandarins reaching for their latest catalogue from the US Industrial Military Complex and ticking the buy box of all the latest floating and flying must-have items required to defend the nation.

So I had a Tim Tam and a cup of tea and my mind wandered back to my early primary school days. Picture this if you will. Young KT sitting at the back of the class trying to read a comic and also listen to the Catholic teacher pointing at a map of the world. A large portion of said map was coloured in British imperial pink, but there was also this large angry ChiCom red section in the East coagulating south into Malaysia and eventually moving south towards the Great Southern Land.

We are obviously referring to the Malaysian Emergency (1948-1960) which would soon become, we were told, an Oz Emergency. 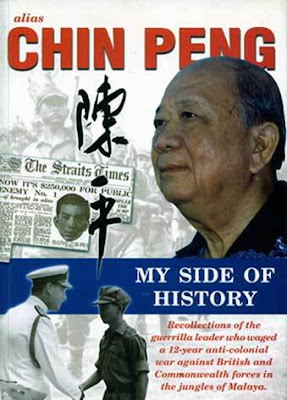 Having recently read the above book (Media Masters Singapore 2003) by Ching Peng the Communist Party of Malaysia's General Secretary, I can assure readers that the prospects of a Red takeover of Malaysia, Singapore and further points south were non-existent. Incidentally, Chin Peng was the recipient of two British military awards as well as an OBE for his anti-Japanese activites.

One Lai Te was a British agent who betrayed his way to the top the CPM party structure. The British counter-insurgency forces ulitised truly brutal methods including psych-ops, a very effective identity card registration system, extra-judicial murder and Boer War concentration camp methods. The Malay Communists were never able to move beyond their home bases in a couple of Malaysia's inaccessible provinces. In fact, their military threat potential was pretty well neglible. They could't even use the rudimentary radios provided by Beijing until they sent their operators to China for radio communication classes. All in all, not a proud British or Australian moment in their respective military histories.

Returning to the contemporary, read this great piece by David Axe in Wired and titled Relax: China's First Aircraft Carrier is a Piece of JunkHERE. It is long, detailed and has great photos, and it will put your mind at ease. Thanks to ChinaDigitalTimes.

FOARP also addresses this this topic, so flick over to continue your reading.

And if you have time to waste, turn to The Diplomat and read Brad Glosserman's perfectly misguided piece titled Is China Trying to Bankrupt USHERE.

Sleep easy tonight all you citizens of the Free World.
Posted by KingTubby at 15:51