While mention of Akira Kurosawa brings to mind The Seven Samurai and his feudal-Shakesperean epics Throne of Blood, Kagemusha and Ran, and if you are a serious fan Yojimbo and Sanjuro, I want to discuss one of his first movies Stray Dog (1949). (The first copy of this dvd I purchased was not without its problems: Great visual b/w values, but the subtitles were done by a Mandarin native translating Japanese to English. When in dialogue doubt, fake it.)

"When homicide detective Murakami's {played by Toshiro Mifume) pistol is stolen, a rash of murderous crimes begins. Plagued with the knowledge that his own weapon is causing the harm, Murakami is driven to extreme lengths to track down the killer and recover his gun. But the closer Murakami gets to the killer, the more he realizes how much they have in common. This is a great film filled with early Kurosawa social commentary on the condition of postwar Japan".
While the rest of the review can be found here, Murakami's frantic search for clues across Tokyo's cityscape - police labs, upmarket venues, shattered buildings, neighbourhood food markets, back alleys with their pickpockets, hookers and pawnshops - is overlaid by a stinking hot, humid summer atmospheric. You can feel the heat, the perspiration and grime forming on shirt collars. Go to the link provided, scroll to the stills at the bottom and get my point. Also, Yankee cultural imperialism in the form of baseball and bikini babe cabaret.

And like The Seven Samurai, the final denouement takes place during the mother of all storms if I recall correctly. Stylish stuff, especially in the wardrobe department, and also shares a similar noir plotline to Pick Up On South Street starring the incomparable Richard Widmark.

To be continued: Battles without Honour and Humanity - Kinji Fukasaku 1973

In 1967, stalwart director Yasuharu Hasebe directed the high production value yakuza tale Bloody Territories. One can view Territories, even through all the blood splatters, as a very conventional take on J-mob culture: uncompromising vertical feudal loyal to the boss as well a horizontal allegience to fellow mob colleagues, as we follow the trials of the Onogi clan which was first ordered to dissolve itself by the governing Kansai Association and then subsequently bankrupted by their bosses bad gambling fortune. Loyalty is the narrative trigger in the ensuing turf battles. TBC 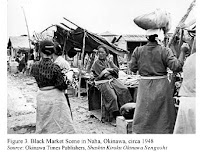 Post WW11 Ground Zero. Many horsemen of the apocalypse stalked the land. Epidemic diseases. Psychological trauma. Widespread starvation. Wholesale corruption by govt officials and industrialists. Millions of now despised ex-soldiers and former colonists returned to the mother country with zero prospects. Women sold their bodies for a couple of rice balls ("That is when I sank into the despised profession of being a 'a woman of the night'".[i]) And, as in all Hobbesian societies, the blackmarket ruled what was left of a devastated economy. Some 20,000 of what were termed Blue Sky markets sprang up across Japan to meet every social need. Not surprisingly, all this offered great advancement opportunities for Yakuza gangs.

Now to Battles Without........ which opens with a savage sequence of events: two large US military police beat a GI rapist into submission, a stall holder has his arm dispatched with a sword, a pretty uncouth piss-up by the yakuza perps followed by a murder. Blood, anarchy, steady cam camera techniques and a lurid colour palette. The narrative {there is no plot) then proceeds to follow ex-soldier Hironi as two crime families fight an episodic turf war in Hirsohima over a 10 year period, stitched together by a Jack Webb The Naked City-type voice over.

Betrayal and retribution in spades, so there is not a lot of honour or loyality in this J-mob flic, except for that displayed by Hironi, and even he comes to that existential truth in the final funeral scene. A serious review here and a silly one here.Fukasaku made four sequels and then the 2000 cult teenage rebellion payback flic Battle Royale.