In 1979 Franc Roddan directed a cinematic version of Quadrophenia which was loosely based on The Who's 1973 rock opera of the same name. 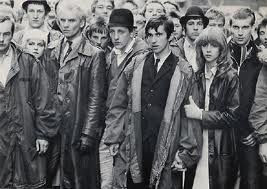 Post World War 11 austerity and British working class poverty did not really abate until the early 1960s. Essentially, life for the great majority was grey, wet and joyless until Merseybeat, The Who and the Small Faces.

The latter two bands focus our attention on the Mods, so due diligence involves a Wiki definition, and here it is in long, totally soulless, footnoted detail.

Dick Hedbidge defines the Mods within the new context "of a dialogue between Black and white youth" thru their supposed music affiliations - ska and rocksteady, plus 'Italianate (fashion) style'.

Anne Marie Long disagrees, stating that "first hand accounts and contemporary theorists point to the Jewish upper-working or middle-class of London’s East End and suburbs."[9] Sociologist Simon Frith asserts that the mod subculture had its roots in the 1950s beatnik coffee bar culture, which catered to art school students in the radical bohemian scene in London.[10]

Steve Sparks, who claims to be one of the original mods, agrees that before mod became commercialised, it was essentially an extension of the beatnik culture: "It comes from ‘modernist’, it was to do with modern jazz and to do with Sartre" and existentialism.[9] Sparks argues that "Mod has been much misunderstood... as this working-class, scooter-riding precursor of skinheads."

Ms Long and Simon Frith are off the reservation, while Hedbidge (who should know better) and Spark commit to very little.

To be precise, Mod culture was a new Youth culture arising out of the relative new affluence now enjoyed by the Working Class in the early 1960s.

And importantly, it was male-centred around clothes,Italian scooters and amphetimines. The Gaze and being a Face/Identity. The quality of the cashmere, the width of a lapel and the placement of a pocket.

Frank Roddan's movie captures all of the above perfectly in this extremely well directed ensemble piece (see photo above). And how do we know that it was a working class movie? Simple. The protagonists fucking swear at every fucking opportunity whatever the fucking circumstances. To read more about this flic, click here and and particularly here.

While the centre piece is the Brighton Beach Mod-Rocker-Police rumble, which used some truly innovative crowd direction techniques (cf accompanying dvd with an extended interview with Roddan), I go for the dance scene with Louie Louie pounding out of the speakers. At this juncture, I became quite orgasmic.

Louie Louie is unquestionably the greatest song ever committed to vinyl. Not only was Richard Berry's adaption of a Jamaican ditty recorded by over 2,000 'artists', but it was the only song in the popular canon to ever be investigated by the FBI. You can read about its illustrious history here, and if you a seeking PhD levels of Louie Louie knowledge click here.

Three great chords, seventeen great songs, but I opt for The Sonics version.
Posted by KingTubby at 13:48