If you are in the Oz very small minority and are in the middle of a self-imposed Royal Wedding blackout, you are probably taking the dog for extra long walks or wasting too much time on the internet. Not having a animal companion to moult hair all over the place while extending my life-span in this vale of tears, I've opted for the latter.

Now most sinologists go for the big Google China news search and then, if time permits, check the ChinaDigitalTimes to congratulate themselves that they have already ready that article. Yep, I'm crucial and am on top of the game.

Glass Dragon: China's Cyber Offense Obscures Woeful Defense published in ThreatPost - The Kaspersky Lab Security News Service written by Paul Roberts 27 April 2001, which you can read in full here. And I will spare you the done-to-death Spy v Spy graphic.

For the last 18 months, Dillon Beresford, a security researcher with testing firm NSS Labs and divorced father of one, has spent up to seven hours a day of his spare time crawling the networks of China's state and provincial governments, as well as stealthier networks belonging to the PLA and the country's top universities. Armed with free tools like Metasploit and Netcat, as well as Google Translate, he's pulled back the curtains on the state of cyber security in China. What he's discovered may come as a surprise to many U.S. policymakers and Pentagon officials.

Aside from identifying the benefits of divorce, lots of freed up net time, Beresford
found that:

Contrary to the image of China as a nearly invincible cyber powerhouse,....that the fast-growing nation suffers from woeful cyber security practices at home that leave, literally, thousands of networks and databases vulnerable to even trivial, remote attacks.

He then went on to identify the full menu of security flaws in Chinese govt networks which embrace the PLA, major universities and SOEs at the State level, and also at the Provincial level. Reading thru the detail of Beresford's finding, China's web networks sound like Swiss cheese.

Previously, "Beresford informed Wellintech (a Beijing based professional automation software company) (of a critical security vulnerability) and CN-CERT, China's national Computer Emergency Response Team, but hasn't heard back from either.

The media hype in the U.S. is all about cyberwar and how the Chinese are kicking our ass. I wanted to know how vulnerable are the Chinese, and what I found is that they are just as vulnerable as the U.s. if not more-so. In large part, I think its because of this lack of transparency and openness. I'm hoping that, as a result of my work, they might realize this and maybe tone down their aggressiveness towards U.S. After all, we have the best people and it won't be long before other researchers will do as I have.

Naive thinking to put it mildly, and not surprising that a significant number of US article commenters all but called him a traitorous swine.

However, Beresford made one good point which cancels out the demands for a public lynching:

In Chinese culture, also, its hard to publicly come out and admit mistakes - a fear that people will lose faith in their abilities.

I develop this point:

Never over estimate the cultural "face" factor, and the inability of individuals in the Chinese net system to admit their security laxity. Even if Beijing issued a diktat calling for a major and comprehensive security overhaul, be sure that the response would be an ad hoc 'going through the motions' exercise.

A cup of tea, a fag and a few calls to local comrades to decide on a local face saving exercise, do the report and hey, problem solved.

Obviously, most of the commenters above who are ready to lynch Beresford have no understanding of workplace methodologies and crisis management in China.
Posted by KingTubby at 17:03 6 comments

Thought the photos would get your attention. Just read The Corpse Walker and Other True Stories of Life in China by Liao Yiwu, a man with a incredible biography. Actually, the wiki entry does not do his personal history justice as the Studs Terkel of the diceng or those at the "bottom rung of society". What follows is 21 interwiews with a range of outcasts such as the Professional Mourner (photo) the Safe Cracker, the Human Trafficker, the Former Red Guard etc, all told in gritty fatalistic terms. Liao has just been denied a visa to attend an Australian literary festival. This is one dark journey thru the [1] Middle Kingdom superstitions and [2] the lunatic Mao history of modern China, which was both truly fucking demented and beyond all normal reason. Sort of like Monty Python on really bad LSD. 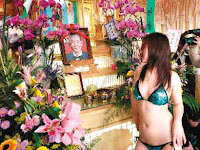 And for the non-Sino wise, some background here on a recent way to go tradition.


The main course here was meant to be a thorough review of all the sites I visit or where I am a regular commenter. But as the title suggests, Sino-English bridge blogs are rapidly losing their allure. However, instead of value-adding to other sites, lets Get Down and Get With It a la Slade

My commenting baptism, like others who have gone on to greater things, began with Fauna's tabloid trash Chinasmack. Scroll back a couple of years, and you will find that some quite serious commentary and quality trollery in the person of Pusan Playa who was a force to be reckoned with in the non pc department. Today, the stories are the same, the commentary is beyond pathetic, but I notice that some of todays big guns still make a sneaky return. You know who I am talking about!

Next on the board of disrepute has to be the now-defunct Chinadivide run by a triunvirate of seasoned bloggers. CD set a high bar in terms of eye candy graphics and rapid response feedback from the overlords. Not so sure if it succeeded in its mission statement, but it sure was fun, and to this day I have a high regard for Kai Pan. (Here one should also mention a couldn't decide who we are, and also defunct site CNreviews. Late arrival here, and the only interesting poster was Adam with his book reviews.)

Other veterans of the Long March incl.

ChinaGeeks run by Charles Custer. Custer is a fractious weblord who, unlike many, wears his political heart on his sleeve. Play-for-keeps-guy lacking a sense of humour, but to be respected.

chinahearsay run by Stan deals with biz/law/IP topics. Has to be the most prolific blogger around, with excessive faith in the legal processes and again displaying an Americans limited sense of humour. Nonetheless, a must check-in site.

Peking Duck run by Richard since 2002 has serious traffic and a couple of pathological trolls to keep you on your toes.

Lets finish this post before it dies on the vine.

Adam is definitely the Christopher Columbus of interesting link-finds and his unfortunate taste in music is forgiven. Want to know what are the contemporary haps in North Korea, hit his link.

FOARP is a hardened Sino blog warrior of long standing, multi-lingual and a major practitioner of due diligence.

Justrecently provides Sino translations, does his own blog art as well as providing sophisticated political analysis.

CMP or China Media Project is a must visit site containing context and translation of CPC editorials and other debates taken from Chinese media sources. I have devoted considerable time on this site outing that windbag, publicity hound and recent detention-hoaxer Yang Hengjun, all to no avail such is the gulliblity of the Oz media.

Finally, want a good rant about anti-Chinese Western media bias after posting a recipe for vegetarian lasagne, where else do you go but to Hidden Harmonies.
Posted by KingTubby at 23:37 4 comments 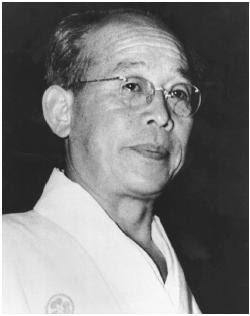 "Kenji Mizoguchi {1923 - 1956) was born into a middle class family, however their way of life started to become difficult after his father decided to start a business selling raincoats to soldiers during the Russo-Japanese. The war ended too quickly and in 1905 the family was left destitute , with Kenji's sister given up for adoption to help cope with the financial strain. She was later sold as a giesha by her adoptive family". Taken for liner notes Her Mother's Profession {1954} with recommended audio commentary by Dr. Barbara Hartley. The book-end to the aforementioned is Streets of Shame (1956) with detailed text analysis. Back reading here and here. 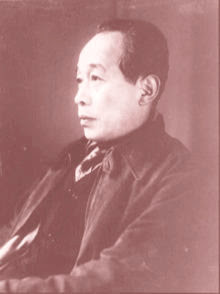 Mizoguchi was not in the business of providing light entertainment. Both are demanding and detailed explorations of a feudal society where the fathers and families on sold their daughters into the sex industry in hard times, and this was a very common phenomena before and after Macarthur's orchestration of the modern Japanese Constitution. There is a whole history of the post WW11 Japanese governments approach to prostitution and the organisation of the sex industry (1), but these two films follow the impact on the women themselves - giesha house fines and loan indebtedness, their lack of skills and how they supported their children or families thru the sale of their bodies.

Street of Shame, set in a giesha house ironically called Dreamland, provides a tremendous example of ensemble acting which slowly reveals the biographies of the five main giesha protagonists. Her Mother's Profession central protagonist is the madam of a giesha house, who has a reasonable relationship with her girls and a flirtatious relationship with the impossibly handsome visiting STD doctor. However, when madame Matsuko's daughter returns, as you would expect triangular complications arise. In both film, the johns are portrayed as drunks and infantiles ripe for the fleecing.

And if this is all too much for the system, I recommend Gate of Flesh (1964) here by Seijun Suzuki, one of the Dig Daddies of Japanese cinema, which follows the travails of a group of tough-as-nails street workers set in a Blue Sky market and rubble of a post-war Japan. These girls flaunted their bottom-of-the ladder status to all and sundry, displaying particular in-your face contempt for their punters. An inversion of larger social values delivered by Suzuki with a colour palette which explodes with energy and grindhouse values which blew Quentin Taratino's mind. And if you are female, there is the fabulous baby-faced Joe Shishido to stir the juices. {1} John Dower Embrassing Defeat:Japan in the Wake of WW11 here - forget the here. The net reviews are crap, so read the original if you are interested in Japanese popular and socio-cultural evolution since 1945.
Posted by KingTubby at 20:02 0 comments